Fitness is a gigantic industry, worth an estimated $4.5 billion over 2020 in the US alone. With the combination of modern tech & info with that massive market size, it’s no surprise all kinds of fitness gadgets are coming out and seeing use. Heart monitoring earbuds, bone conduction for your sound, and blood oxygen monitoring are just some of the new creations seeing widespread use. Today though we’re focused on watches, and the best fitness watch in particular. Our top pick is the Garmin Fenix 5 Plus, though we’ve come up with some alternative options for you as well.

A good fitness watch is a combination of style and technology, giving you all the data you need to make the most of your exercise and live a healthier life, whilst also having the functions of most modern smart-watches. The reason we went with the Fenix 5 Plus is that it scores highly as a fitness tracker and a smart-watch, while also looking great too. 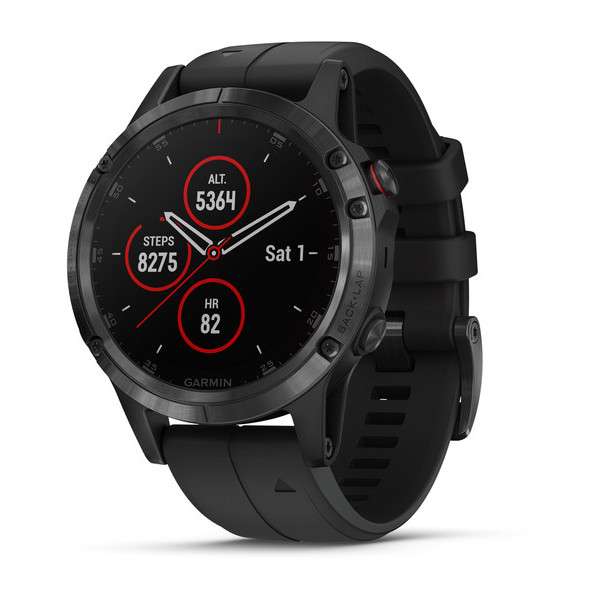 Our top pick comes with a big list of features – and a big price tag to go with it. Garmin has been a huge name in outdoor watches and trackers for decades, way before the first smartwatches had even been thought of. Their specialty is mainly their GPS technology, which is known to be extremely accurate and reliable. The amount of tech they were already using in these outdoor watches made it a no-brainer for them to enter the fitness tracker market once that began to take off.

With the Fenix 5 Plus Garmin have created a complete smartwatch for athletes or the outdoors in general. It comes stuffed with almost every feature offered elsewhere in the Garmin line, to the point you’re unlikely to need everything that it can do. This watch is available in a regular version and a sapphire edition, which comes with a scratch-proof screen. There’s also a titanium sapphire edition available, combining the scratch-proof sapphire screen with a titanium surround, and giving you a very sturdy watch that could survive almost any natural damage or wear and tear.

The first thing that stood out to me about the Fenix 5 Plus was how good it looks. It comes with a very slick all-black look. You can change this up a bit if you want to because the straps are changeable, so you can go for your own choice of color and either a silicone, leather, or metal wrist-strap. They all work well and the standard resting display for this watch is pretty minimal and neat, with the time being clear to see. 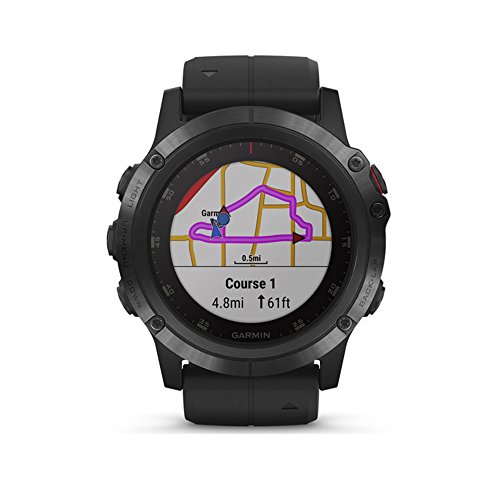 Regardless of what version you buy (sapphire, titanium, standard) your Fenix 5 Plus is going to last for a long time. These watches are known to be very reliable electronically, they keep going for many years past purchase just like other Garmin watches. The case is solid enough to withstand most bumps and bangs too, so there’s no worry about breaking it if you or your arm end up bang into anything.

The GPS on Garmins watches is known to be extremely accurate and a lot faster than most phones. Of course, this is great for finding your way around and never getting lost, but why does it matter to fitness enthusiasts? Because accurate GPS means accurate distance tracking, and accurate pace tracking as well.

Let’s go through a quick list of what Garmin Fenix 5 Plus tracks – it includes a heart rate monitor, an altimeter, an accelerometer, a compass, a gyroscope and a thermometer. With all these sensors and the great software included, you are given all kinds of data from VO2 max to recommended recovery time and performance capability.

This watch syncs up easily to most smartphones and can transfer data across to them using the integrated app. It can alert you to notifications and allow you to take calls through the watch, allowing you to keep your phone safely stored. It even has included storage and offline music playback, so there’s even less need to physically carry your phone.

Easy to Use Buttons

The buttons on this watch stick out a good distance and are easy to push even whilst sweaty or cold. The easy usability of this watch makes it a popular choice for athletes everywhere.

Fitness trackers are everywhere these days, but they tend to be for use on land, not in water. With the Fenix 5 Plus, Garmin offers a waterproof option that not only can be used in water but also has some advantages there. For example, there’s a built-in stroke tracker so you can measure exactly how you’re performing in the water. This is a great feature for triathletes and swimmers. 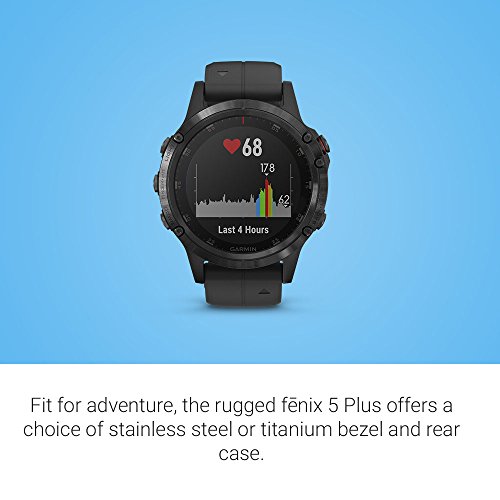 This Garmin has a great battery life, it can last well over a week on a single charge even with some GPS usage. The more features you use, the quicker the battery will drain. With that said, you can switch all the features on and still get a good 24 hours of use out of it – and who needs fitness tracking, GPS, and more for a solid 24 hr period without the ability to charge?

One thing which some users dislike about the Garmin Fenix 5 Plus is the size of it. The watch comes in at near 16mm thick with a 1.2” display and weighing near 80 grams. That’s quite large for a fitness tracker and stands out even against other, bigger fitness watches. If sleek and discreet is what you like, this isn’t going to be ideal for you.

The biggest drawback of this watch is the price. It comes in at a much higher price than the alternatives and is literally well over 10x the price of our budget picks. Garmin is a known high-end brand though, so the cost is expected, and they do offer some cheaper alternatives if you’re interested. Take a look at our articles on the best Garmin for hiking, for triathlons or even for kayaking to get more ideas. 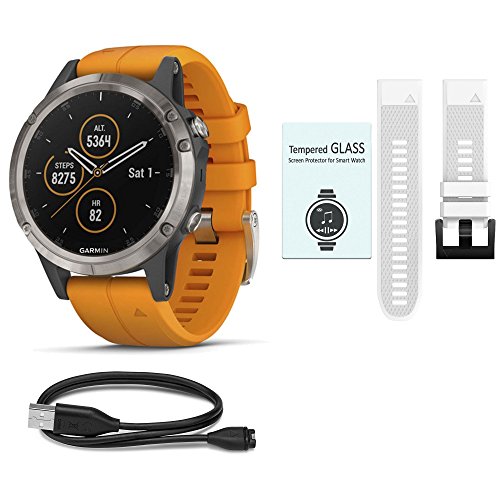 Best on a Budget – Moov Now

While this isn’t technically a watch, we had to include it anyway just because the Moov Now is such a great fitness tracker (even if it does lack a watch-face). It’s our budget pick because it’s so unbelievably cheap yet still offers a whole load of features.

The Moov Now has a unique, distinctive look. It’s not likely to be mistaken for a different tracker. The Moov has a comfortable and breathable strap, and is small in size too. This and the lightweight of this tracker make it really comfortable to wear and use.

This tracker comes with an app, and the app includes free workouts that you can use. You will usually need to pair the tracker with a phone to use these workouts as you’ll need a screen or speakers which aren’t included on the Moov Now to make the most of this feature. The workouts are limited but they’re better than nothing, and the accelerometer is useful because it keeps you working at the right pace throughout the workout. 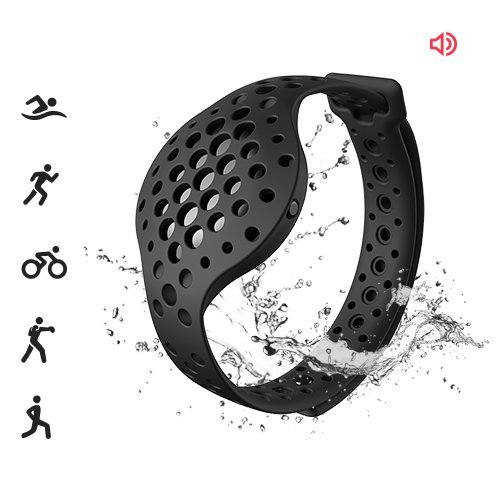 This is the cheapest fitness watch on our list by far, which isn’t so surprising when you remember it isn’t an actual watch. Still, it holds its own as a fitness tracker and is so cheap that you could just buy a separate watch anyway.

Another bonus to having a basic fitness watch like this one is how long the battery lasts. It uses a changeable battery that powers the unit for around 6 months at a time and isn’t affected much by what features you use or how often. The Moov Now gives long-term reliability, since there isn’t much to go wrong and it’s pretty resistant to accidental damage too.

We already covered the general durability, but this watch is also highly resistant to dust, sweat and water. This makes it great for gym use and ensures you won’t accidentally damage it by sweating too much.

The data monitoring in this tracker is done purely by an accelerometer, so there isn’t a wide range of stats that some fitness watches offer. There’s no heart rate or altimeter for example, and the sleep tracking works by estimates instead of using actual data from your body metrics. 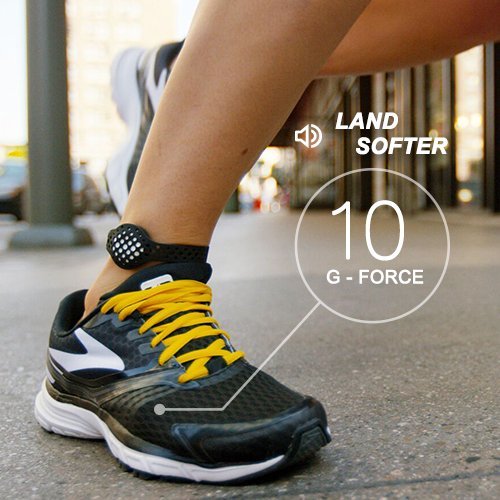 The Huawei Band 2 Pro is our budget choice for people wanting/needing a watch face as well. It’s a little more expensive than the Moov Now but is still in the budget range. Huawei are a lesser-known brand, especially for fitness watches. They’re trying to even the playing field by offering more in terms of features at a price point below their competitors. It may lack the finesse of a Garmin or a Fitbit, but it holds its’ own on performance. 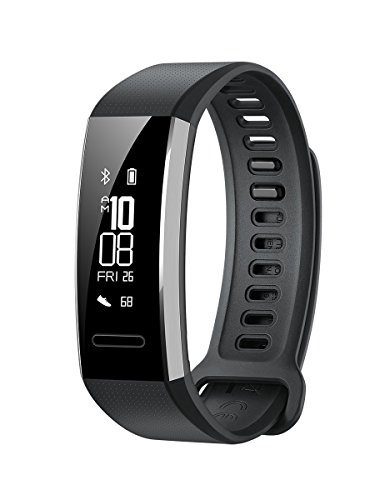 Huawei have marked their Band 2 Pro as being water-resistant rather than waterproof. The rating is actually 5ATM which is quite high for a low priced watch. You’d be safe swimming with this since it’s safe to 5ATM (5 times atmospheric pressure). That is assuming you aren’t a deep-sea diver or anything…

We’ve already mentioned that there are plenty of features. These include GPS, a heart rate monitor blood oxygen monitor, sleep tracking, and phone connectivity.  All of this plus its’ own app to monitor and manage your data. The GPS is definitely the top feature because it has great accuracy. It’s close to what you’d expect from a Garmin device.

Huawei’s Band 2 Pro has a rechargeable battery which is claimed to last 21 days on a full charge. If you aren’t GPS’ing all the time, it’ll last all week which is pretty good.

The strap on this watch isn’t changeable. It’s also made from quite a stiff rubber and doesn’t have the best flexibility. You can fasten it looser so the rubber isn’t too tight but then you can’t use the pulse monitoring. Tightening it up properly makes the stiff rubber press against your skin, which is uncomfortable for daily users. 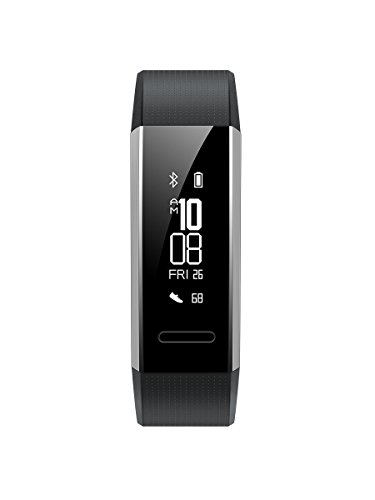 There isn’t a real touchscreen, instead it uses a button sensor below the main screen. That’s okay for a quick press but it means navigating every setting with a press or hold on the same button. Going through these presses can take a while and gets a little irritating when you have to go through 6 pages of phone notifications before even starting to navigate a menu.

The Huawei Band 2 Pro isn’t equipped with a scratch-proof screen or sturdy internals. It’s made more for casual use and can be scratched or marked quite easily. Be aware of this and take good care of yours if you buy one. It’s not overly delicate but it won’t take the beating some high-end watches might.

Ultimately the choice is yours and depends on your needs. Personally if I was on a budget I’d go with the Moov Now for fitness uses and pick up a separate cheap watch, like a cheap G-Shock, if a watch is also needed.

If the price isn’t so much of an issue there’s no question that the Garmin Fenix 5 Plus wins. With a couple of extra straps, it could look the part in almost any setting and does everything a good fitness watch should – plus more. This is definitely my top pick overall. 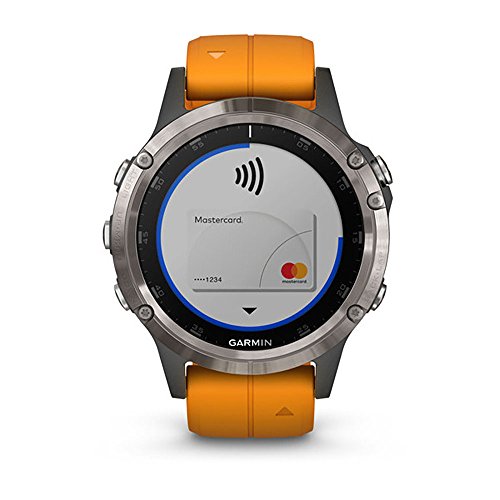